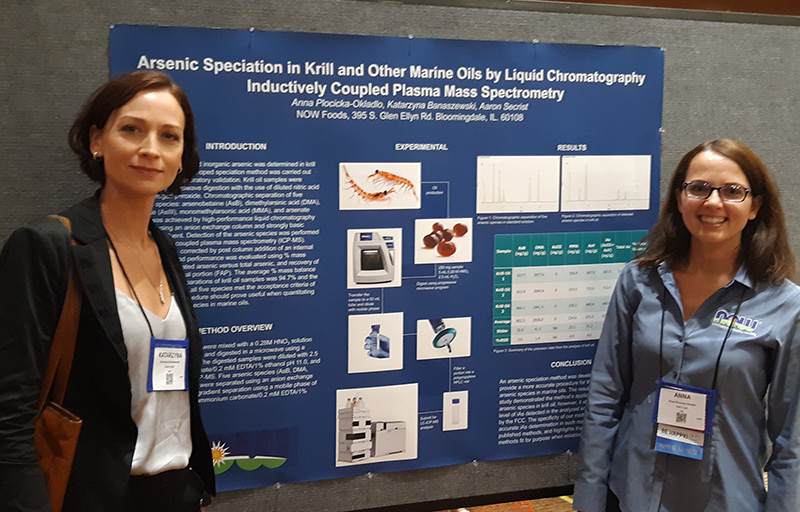 In late 2017, the Food Chemicals Codex (FCC) released a monographed standard to help promote quality krill oil identification and purity testing. Included in these requirements, along with standards for EPA, DHA, phospholipids and astaxanthin, is a limit for inorganic arsenic. However, the method defined in the FCC monograph, which is not able to accurately differentiate between the chemical species of arsenic, is inferior to higher sensitivity and specificity speciation methods, such as HPLC-ICP-MS. Additionally, the complexity of the krill oil matrix requires suitable sample preparation to liberate arsenic species and allow for precise quantitation of inorganic arsenic.

To improve upon the FCC monograph, the NOW Methods Development team conducted a study to develop and validate a procedure for determination of inorganic arsenic in krill oil samples and thus contribute to a more accurate risk assessment analysis for krill oil supplements. The specificity of this method allows for more accurate inorganic arsenic determination compared to other published methods.

“We determined that available test methods did not go far enough in ensuring that krill oil we were sourcing for our supplements met our purity and safety standards,” said Aaron Secrist, NOW’s Vice President of Quality and Regulatory Affairs. “We published the method in keeping with NOW’s long standing practice of sharing test methods we develop with the industry.”

NOW Methods Development Supervisor, Katie Banaszewski, gave a talk on the elemental speciation of arsenic in krill oil during a scientific session of the 2019 AOAC conference in Denver, CO earlier this year.